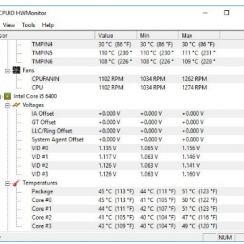 CPUID HWMonitor Free is a hardware monitoring program that reads the main health sensors on a computer, such as voltages, temperatures, and fan speeds.

The program supports a wide range of sensor chips, including the ITE® IT87 series, most Winbond® ICs, and others. It can also read on-die core thermal sensors on modern CPUs, as well as hard drive temperatures via S.M.A.R.T and video card GPU temperatures.

Special hardware monitors, such as the Gigabyte ODIN power supply series and the abit uGuru, are also supported.